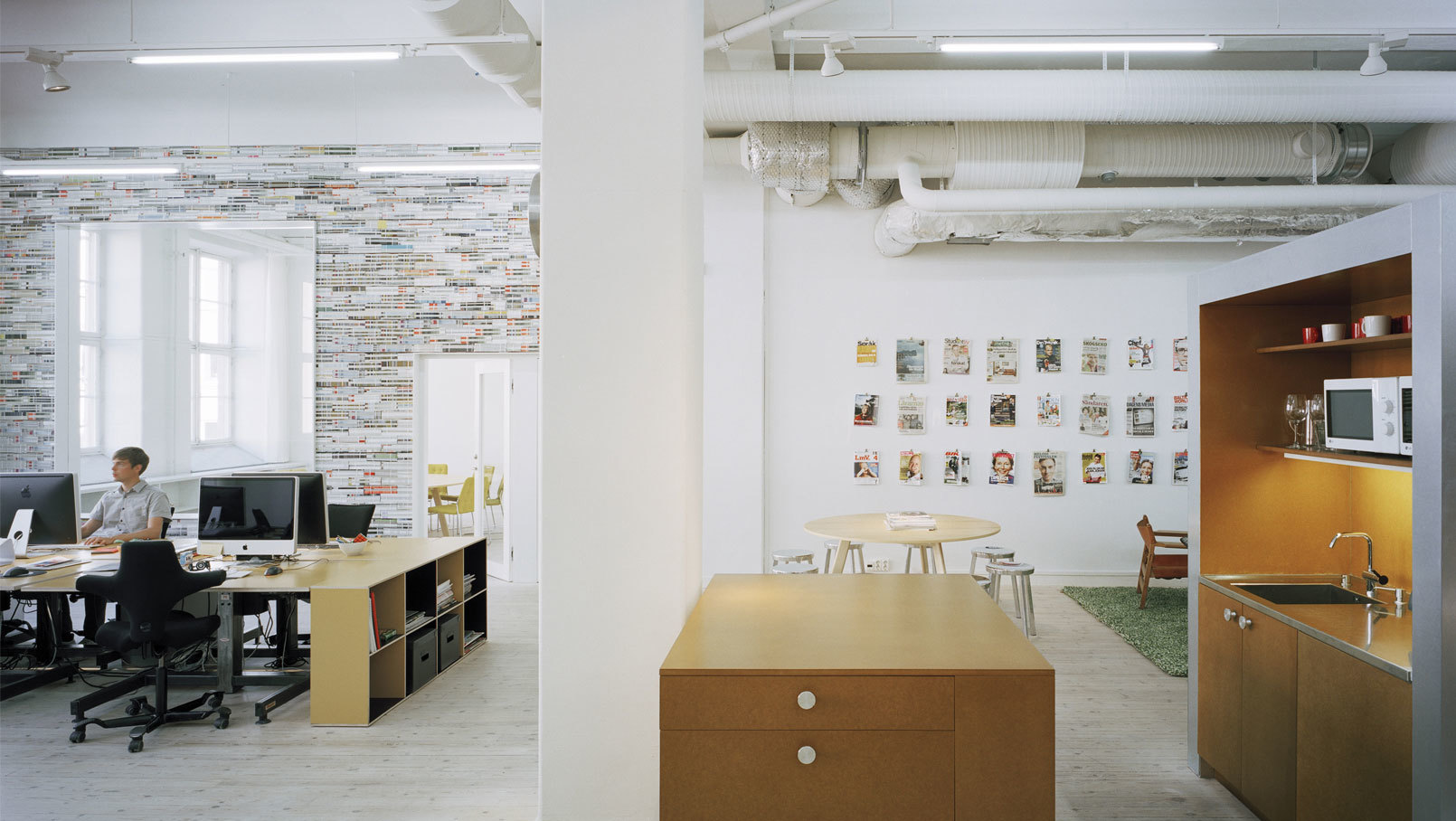 Elding Oscarson was in charge of this 160sqm design bureau for magazines and web, housed in an old textile manufacturing hall in the very center of Stockholm. The architects loved the naked, lofty and bright spaces, but needed to alter it drastically to make it operable for their business. There was a mezzanine in the space, with a windowless meeting room underneath and a country style kitchen sprawling along the walls, all arranged in what appeared to be an L-shaped space. The client liked the uninterrupted row of windows, and wanted to keep it that way. Yet a bigger meeting room with windows, an atelier table for informal meetings, and more workstations was on the wish list, along with an entrance lobby and a small kitchen with a dining table. 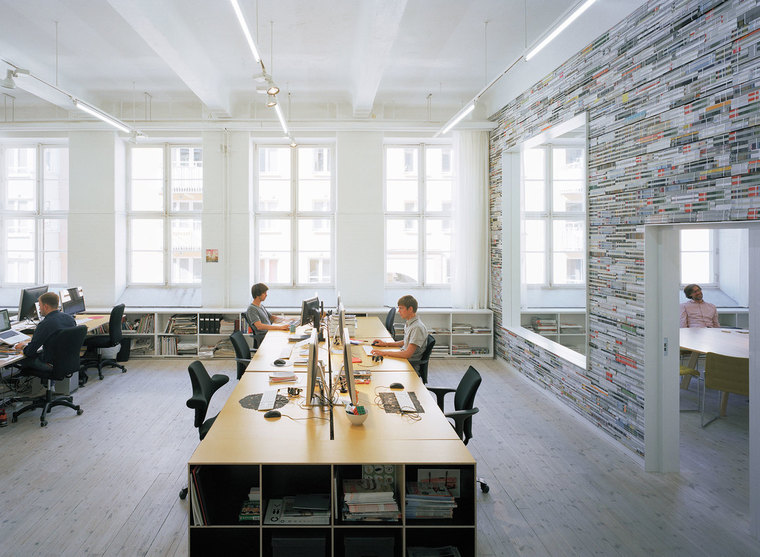 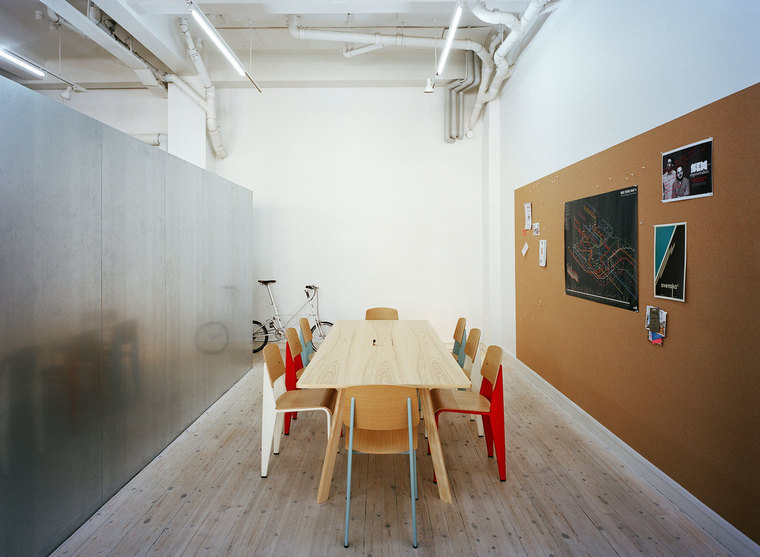 Dividing the space with a wall gives a very bright and large meeting room, as well as a clean rectangular room for the rest of the program. This large space is softly divided with a box containing service functions and a kitchen. By compressing the contents of the box and positioning it very carefully, the program effortlessly falls into place without breaking the impression of a single large room. The purposefully magnetic cladding of galvanized steel picks up the colors of the surroundings in a hazy reflection and further defines the box as an inserted element. 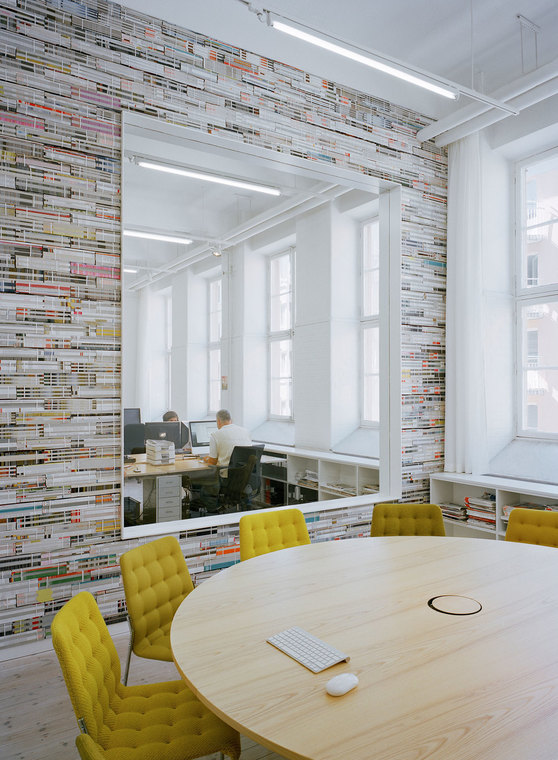 By finding the right balance between a very large pane of glass in the wall and a construction method for the wall that makes it feel both temporary and solid, the spatial atmosphere of an uninterrupted row of windows is kept while the rectangular geometries of the rooms are clearly defined. Besides having a literal relevance to the client’s business, the wall made of stacked bundles of magazines is not only a natural conversation piece in its mere irrationality, but also works as an acoustical absorbent. 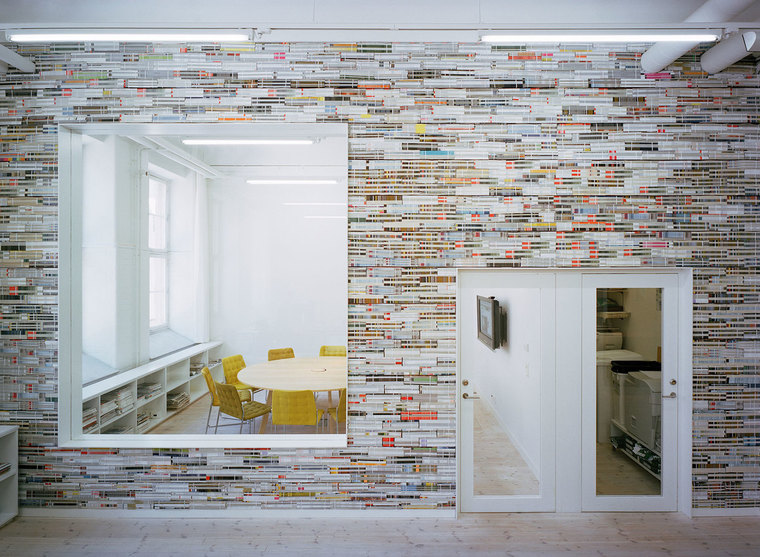 The lighting solution and interior project, which to a large extent uses our own furniture designs mixed with vintage pieces and staples already in the client’s possession, aim at highlighting the nakedness of the space. Largely, the raw, untreated space was kept untouched after demolition. By adding only two clearly defined architectural elements, the client’s wish list could be met while keeping the beauty of an industrial atmosphere.

All photos by Åke E:son Lindman